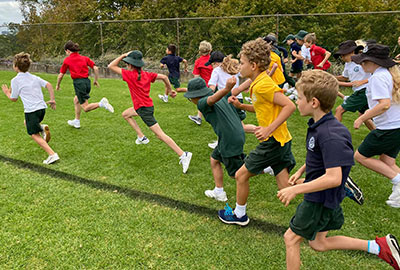 St Francis of Assisi Regional Primary Paddington, run the cross country in preparation for the carnival.

SCS has never before held an event of this magnitude and SCS’ Specialist: Sport – Pre to Post, Troy Moran, is beyond excited.

“Sydney Motorsport Park is an excellent venue,” Mr Moran said, adding it will also be the venue for the upcoming MacKillop Cross Country Championships.

SCS offers primary students a pathway to higher representative sport in 16 sports, starting with school trials, moving through to zone, conference, and inter-Diocesan levels and, finally, progressing to state and national competitions.

This year, for the first time, cross country athletes will get to bypass combined cluster and regional stages, instead directly advancing to the Archdiocesan Championships from their school trials and carnivals. The MacKillop Championships come after this.

“The standard of students coming through (to Eastern Creek) from the initial stage will be at a higher level with a specific criteria, including course structure and timing,” Mr Moran said.

“Each school can send up to four students, provided they meet the qualifying standards.”

In another SCS first, participants will be given a customised bib, provided by MultiSport Australia, to wear at the May carnival.

“The bib not only is a memento for students, but also serves the purpose of getting students into the correct race as well as timing being electronic,” Mr Moran said.

The day will be split into two sessions, with 60 schools in each. The morning and afternoon sessions will be further broken down into groups A and B, and C and D, respectively.

“We split the races so that each race isn’t overcrowded,” Mr Moran explained.

“The top four from each group will progress along the pathway to the MacKillop Cross Country Championships, on Tuesday 8 June.

“An additional eight spots will be selected based on times and special considerations, meaning [SCS] will send 24 students to the MacKillop Championships for each event.”

It will involve 120 Sydney Catholic primary schools, including five congregational schools, competing in:

Most of the track involves grass running with some crossovers onto asphalt. The 2km course has a slight incline but is relatively flat, while the 3km course is quite challenging and runs around the perimeter of the venue with a few hills within it.